After the attack on Gladstone

After the Siege of Yvel

Victor Glaston was the Royal armorer and blacksmith of Gladstone Keep during the Nether Mask Conflict. He later betrayed King Richard sometime after the Fall of Gladstone Keep and fell to the Dark Path. By the events of the Portal Crisis, his daughter Victoria now tends to the forge.

Initially a loyal subject of King Richard, he could be found buying and selling a modest selection of weapons to the Champion on his quest to recover the Ruby of Truth from Sir Roland at his estate in the Southlands. Upon the Champion's return, however, Scotia had snuck into the Keep and poisoned Richard, and again the Champion quested to discover a cure for his condition. Upon the Champion's return, however, Gladstone Keep had been raised by Dark Army forces, with Richard's body stolen and the rest of the occupants either killed or forced to flee. Victor had chosen to hide in the bushes near Lake Dread and await the Champion and Baccata after leaving the Draracle's Cave, where he directed the two heroes to a boat manned by Dom who could take them across the lake to Opinwood, while he himself elected to stay behind, intent on settling the score. It was sometime after this he was presumably captured by the Dark Army and convinced to side with them before making his way to Yvel. There he opened "Victor's Arms" and had presumably been working on providing weapons and armor to his legions of Cabal Warriors for the Commander of the Dark Army Frendor before being interrupted by the Champion and his compatriots. Despite his newfound loyalty, he continued to trade in arms and armor with the party, all the while keeping his dark allegiance a secret. It was only after the Siege of Yvel that the Champion and the others discovered his betrayal when he was confronted in the War Room beneath the Catwalk Caverns. After attempting to persuade the heroes into accompanying him on the Dark Path, reasoning that it was too powerful to be defeated, they rejected his offer and proceeded to battle with Frendor and the envoy Mylek. In the midst of the melee however, Victor managed to escape and so far has not been seen or heard from again, although his daughter Victoria would since go on to become the new Royal Blacksmith for Gladstone Keep in his absence. 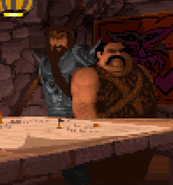 Retrieved from "https://lands-of-lore.fandom.com/wiki/Victor_Glaston?oldid=12879"
Community content is available under CC-BY-SA unless otherwise noted.