The Draracle, once known as Anu, is an Ancient, one of the elder gods. He plays a crucial role throughout the events of the Lands of Lore trilogy.

In the Golden Age, the Ancients lived apart from the world. Their powers were vast, yet they did not mettle in the business of mortals. Belial however transgressed against this restriction and soon began giving powerful weapons as gifts to the Dracoid race, thereby fostered war in the world, and the Huline were nearly wiped out before Anu stepped in. Belial would not cease his meddling, and Anu saw himself as the only way to prevent the total annihilation of the Huline race. The Ancients ultimately sentenced Belial to death. Anu was to be the executioner, however, for he had meddled as well- until this point, no Ancient has ever harmed another.

Before his execution, Belial built a vast organic mother-beast, so that he might be reborn into the world in some far, future time. All the Ancients withdrew to another plane, except for Anu, who remained behind to watch over Belial’s creation. After many, many centuries of war and chaos, the lands settled into peace once more. Humans, Huline, Dracoid, and Thomgog finally lived in peace. After many years, the right situation for the mother-beast arose, and she began her foul work. Taking power from the remaining Ancient magic in the land (unleashed when Scotia’s minions began digging up the ancient magical artifact Nether Mask from the Urbish Mines), the Beast began to reassemble Belial, creating dreadful spiders and botched versions of the dead god.

The Champion: Excuse me, we are seeking a cure for King Richard of Gladstone.
Jakel: Peasants! How dare you bother the master before placing an offering!
Jakel: Go through the archway there, and place your trinket on the altar.

Approaching The Altar:
Baccata: To which trinket could he be referring?

Offering a random item:
Baccata: I think they want a different offering.

Offering the Jeweled Dagger or Silver Goblet:
Baccata: Splendid! Let us go now and get the Elixir.

The Champion: We are seeking a cure for King Richard of Gladstone.
The Draracle: I am aware of that.
The Draracle: Only the Elixir of Tybal can cure Gladstone's monarch. Ingredients are everywhere, but the Elixir you seek can only be created in an ancient white tower.
Baccata: I say! Could you be a bit more specific?
Jakel: The Master has spoken! If you want more information you must present another gift.
The Draracle: No! I will answer their query. Fate has condemned me to this course and along its path I must tread.
The Draracle: You must obtain four special trophies.
The Draracle: First, you must butcher the creature whose flesh has never lived. Next, you must see the sweetness of your enemy. Your third ingredient must be collected from the deadly depths. Lastly, You will need powders taken from the heart of your mother. This has been inscribed on a scroll for you.
The Champion: Thank you.
Jakel: The Master has spoken! You must leave now!

Leaving The Draracle's Cave:
Baccata: Bad luck! I presume we shall have to unravel the Draracle's riddles before we can assemble any of the ingredients.
The Champion: Let's return to Gladstone. Maybe one of the Council can figure this out.

Additional dialogue in case Lora joined the Champion's party:
Lora: Hi, I'm Lora, you know, from Grisbl? Where do I go now?
Jakel: When your companions are finished, you shall wait here.
The Champion: Well, so long Lora. Best of Luck to you.
Lora: Thank you very much for your assistance. All Grisbl owes you a debt of gratitude for leading me through those dreadful caves.

Draracle: All is ready for my departure.
Draracle: Place the Seal after I have passed through the Shining Path, and all my magics will cease to exist on this mortal plane.
Jakel: All your magics?
Draracle: Goodbye Jakel.

Meeting in the Volcanic Caves

Copper: Hey, you're the Draracle!
Draracle: Yes, many have called me so.
Copper: You're real aren't you, not a puppet?
Draracle: Are we not all puppets?
Copper: No, I mean... anyway, here you are.. uh, what should I do?
Draracle: Do? About what?
Copper: What? Aren't you all knowing?
Draracle: All is a difficult word to use precisely.
Draracle: Your presence here indicates that my exit from this mortal plane has not gone smoothly. The mirror must have broken. There will be rifts opening in your world.
Copper: So, you DO know. What should I do?
Draracle: You've lost your soul. It can be found in one of the other dimensions.
Draracle: But the portals must be closed to prevent their leaking into yours and destroying it by corruption.
Draracle: You must find the precious mirror shards and return them to seal the portals.
Draracle: Find the Golden Sigil in my chambers. I will appear and direct you once you are there. Only the Sigil can guide the pieces. Only when the mirror is repaired can your soul be re-joined with your body.
Copper: Uh, okay, thanks. I think I've got this all. I've been writing it down as fast as I can.
Draracle: Farewell then. I am no longer here.
Copper: We've heard that before.

After speaking with Jakel

Draracle: Follow the path.
Draracle: I will open the door for you.

After acquiring the Sigil

Draracle: Good, You have found the Sigil. Use it to guide the broken pieces of the Shining Path.
Copper: So, I have to go into the portal world and look around for pieces of a broken mirror. Any chance you could explain more fully what's going on here?
Draracle: The Shining Path is a mirror which controls the reflections of all possibilities in this mortal realm. The breaking of the mirror created tears in the fabric which separates the dimensions.
Copper: Okay, I suppose I understand that sort of, but why can't you just fix this yourself?
Draracle: I am no longer here. When I stepped through the Shining Path, I left behind any ability to touch your physical world. I cannot even hold the Sigil.
Copper: Then why could I see you in the Volcano world?
Draracle: I have served as oracle here in your world for eons. My being resonates beyond my actual occupancy, and as I pass through each of the mortal realms on the long walk back to join my own kind, my image is visible to all who seek me still.
Copper: Oh. Well.
Copper: One other question, if you don't mind. Why do you have to leave here? Why can't you stay, and continue to serve? Are you tired, or what?
Draracle: Surely you have heard of Belial?
Copper: I did meet Dawn's sweetheart Luther, and he was in the tavern telling all about his recent adventures in the Southern Continent, and fighting some awful god named Belial, but really, is all that true?
Draracle: I was the Guardian, vigilant for the ages, guarding against the resurrection of Belial. When Luther defeated Belial, my guardianship was ended. I have no choice. I must leave this realm and rejoin my brother. I will have other responsibilities, but no more in this place.
Copper: Oh, okay. Just thought I'd ask.
Draracle: I have reached the end now. I have traveled through all the realms and now I will step out. This is the last time, and you are the last mortal to whom I will speak Copper.
Draracle: Farewell, I am no longer here.

Draracle: Please. I cannot respond to that.
Draracle: Your interruptions delay your salvation.
Draracle: I cannot be provoked.
Draracle: If you are finished... ?
Draracle: Enough!

Ending screen
Add a photo to this gallery

Appearance of the Draracle in an early trailer

Meeting with Dawn and Baccata 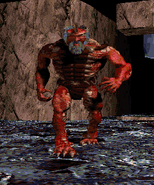 Belial's vision of Anu
Add a photo to this gallery 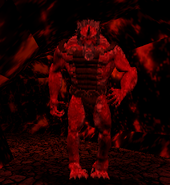 In the Volcanic Caves

A projection of the Draracle's head 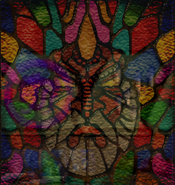 Stained-glass depiction of The Draracle 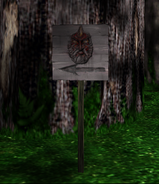 Signpost in the Gladstone Woods 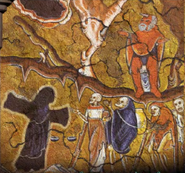 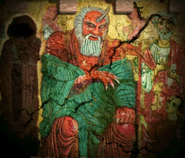 From Installer Intro
Add a photo to this gallery

Retrieved from "https://lands-of-lore.fandom.com/wiki/The_Draracle?oldid=16387"
Community content is available under CC-BY-SA unless otherwise noted.