Leader of the Dark Army, Sorceresses, Antagonist to the Champion, Mother of Luther

"Beware King Richard! You will pay for your lack of vision!"

Scotia (real name Margarithe Fiston) was a powerful witch and arch-sorceress of the Dark Army. She died at the hands of the Champion during the events of The Throne of Chaos. The protagonist Luther of Guardians of Destiny is her son.

Scotia was the first mortal in 18 century to gain control of a major magic artifact - the Nether Mask - which allows its user to shapeshift at will.[1] Shortly before her death, she attempted to transfer the power of the ring to her son Luther, but instead ended up cursing him to involuntarily shapeshift between a Beast and Lizard creature without warning.

Introduction cutscene:
Scotia: What can be taking so long? I want it now!
Scotia's minion (presenting her the Nether Mask): Your unholiness!
Scotia: (killing the minion): You will not make me wait again.
Scotia: (looking at the Nether Mask): Ha! It's a pretty little package! At last! Richard and his forces have met their match.
Scotia: (transforming into a young lady): Ha! I like this!
Scotia: Yes! This mask will serve me well. Beware King Richard! You will pay for your lack of vision! Hahahahaha!

In the Northland Forest:
The Champion: Hmm, what would a beautiful young woman be doing on a road like this?
LadyBird: Excuse me lad. Are you with King Richard? I need to get into the Keep, and I have forgotten the password. May I go in with you?
The Champion: I am sorry Miss, but these are dangerous times!
LadyBird: (Leaving): Timid fool! I will not forget you!

Attacking King Richard in the Throne Room:
Dawn: Leave him vile witch!
Scotia: You cannot stop me! I found the Mask! My warriors have the Ruby, and this realm will soon beg for mercy beneath my heel!
Dawn: Postpone your celebration, hag! I will not permit this travesty!
Scotia: Oh? The inept charmer threatens me??
Scotia: (after being struck by her own magic attack): You, Dawn, will be the first to grovel at my feet!

In Opinwood:
Scotia: You fellow have become bothersome. Don't press your luck. You don't want to make me angry. I have business in the tower now, and I do not wish to be disturbed.
The Champion: I wish she would just stay and fight!

In Castle Cimmeria:
Scotia: (Warning): You will not cheat me again.
Scotia: So! You worthless dogs have come to your deaths!
The Champion: It is you who will breathe your last, Scotia!
Scotia: Ha! You brought my Ruby and its Shard to me! That fool Richard actually believes the old tale that they may defeat my Nether Mask. It is folly. They shall give me even more power.

The Defeat of Scotia:
The Champion: Well struck! That looks to be a mortal blow!
Scotia: Fool! My death will not save you from our wrath!

Scotia at her camp near the Urbish Mines

Scotia using the power of the Mask to appear younger 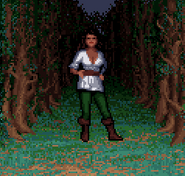 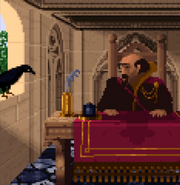 Scotia as a crow in Geron's Office

Outside the White Tower 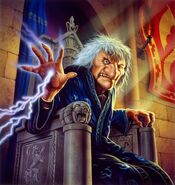 Official artwork
Add a photo to this gallery

Behind the Scenes[edit | edit source]

Retrieved from "https://lands-of-lore.fandom.com/wiki/Scotia?oldid=16339"
Community content is available under CC-BY-SA unless otherwise noted.