"Well, I won't just sit here on my backside while that wench has her way with the whole countryside!"

Paulson is a Royal Councilor, Mining Engineer, and the third and final permanent companion to the Champion.

Paulson is a member of the Royal Council of Gladstone. He was once the royal blacksmith and has since given these duties over to Victor. Paulson has learned some magic from Dawn, but prefers to use a sharp blade to settle his affairs. Paulson has little use for diplomacy. He will choose to join you when you find him in the Urbish Mines.[1]

After King Richard's poisoning:
Paulson: I don't know about you people, but I'm going down to the Urbish Mines and get to the bottom of all this mask business!
Dawn: Come now Paulson, do not be so rash! The Urbish Mines are where Scotia found the Mask! The Dark Army is surely swarming all over that place.
Paulson: Well, I won't just sit here on my backside while that wench has her way with the whole countryside!
Paulson: Enough talk! We've got to do something now!

In the Urbish Mines :
Paulson: Lads! I thought you were lost!
The Champion: We have discovered a recipe for the Elixir! We need the Keys so that we may apply it to King Richard.
Paulson: I'll join you then. We'll need this Key.

Interacting with the torch:
Paulson: Torches aren't much good.

Interacting with the papers on his desk:
Paulson: Ancient maps.

Interacting with his books:
Paulson: Studies of gemlore and excavation.

Approaching Paulson:
Paulson: We should leave.

After leaving:
Paulson: Lads, a secret button to the south hides my equipment!

While facing the secret button:
Paulson: Let the button be revealed!

At the War Room in the Catwalk Caverns:
Frendor: Welcome adventurers! My name is Frendor. So, you have finally passed my tests. Welcome to the Army of the Dark Path. I am certain that you will become my most valuable lieutenants.
Mylek: I am Mylek, First Envoy of the dark path. Join us now and we shall rule eternal.
Baccata: We shall never join you Mylek. Richard rules Gladstone! We will die before we bow to you.
Paulson: Throw down your weapons and fight us no longer!
The Champion: You cannot hope to sway our convictions. We shall defeat you here and return the rightful king to his throne.
Victor: Be reasonable, [Champion]. Dark Army too powerful to beat. Join, and become respected like Victor, Imperial Blacksmith.
The Champion: Honor means more to me than money and titles, Victor!
Frendor: Then you shall die! 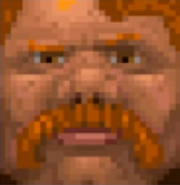 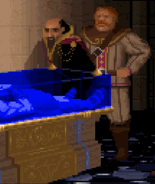 Retrieved from "https://lands-of-lore.fandom.com/wiki/Paulson?oldid=16365"
Community content is available under CC-BY-SA unless otherwise noted.