Orcs are a race of monstrous humanoid creatures of little intelligence native to the Barren Plains. They once formed the backbone of Scotia's Dark Army, although since her death during the Nether Mask Conflict, their leadership has grown unstable and small groups of Orcs have split off from their brethren, forming their own coteries in the Lands, and some even settling in human cities.[1][2][3]

Orcs appear to comprise a number of different sub-races that are then further categorized as "Lesser" or "Great" Orcs. Hierarchy amongst orcs (an thus, within the Dark Army) is then determined by their relative size and strength.[4]

Lesser Orcs are the diminutive variation, often standing a bit shorter then an average adult human. Their skin color ranges from green to purple to brown. They have very large mouths compared to their heads, five fingers and digitigrade feet with four toes, plus a dew claw. Their eyes may be brown or red. They often equip themselves with light armor and fight in large groups with a wide variety of weaponry including bows. Their hair color, if they possess hair, tends to be brown and may be worn loosely or in locks.

Great Orcs are more much physically intimidating, standing well above the average human and possessing a more "pig-like" appearance with large jaws, flat noses, and jutting tusks. They are slight smarter then their lesser brethren, though never the less none too bright. All of them appear to possess red eyes. They equip themselves almost exclusively in ornate metal armor and wield large battle axes, showing no interest in ranged combat. Their hair is black to dark brown and typically worn in a mohawk or dreaded style. Skin color ranges from a earthy, fleshy hue to green to dark bluish grey to red.

Lesser Orcs (Lands of Lore: The Throne of Chaos)

Orc's Leader (Lands of Lore: The Throne of Chaos)

Great Orcs (Lands of Lore: The Throne of Chaos) 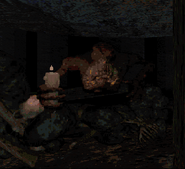 The Old Orc found in the Draracle's Cave (Lands of Lore: Guardians of Destiny) 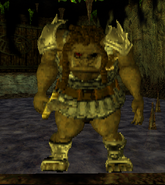 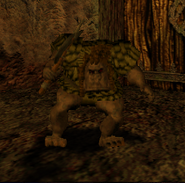 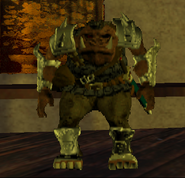 Retrieved from "https://lands-of-lore.fandom.com/wiki/Orcs?oldid=17662"
Community content is available under CC-BY-SA unless otherwise noted.