Lands of Lore Wiki
Register
Don't have an account?
Sign In
Advertisement
in: Media, Sources, Lore Articles, Lands of Lore: The Throne of Chaos

Lore of the Lands - Volume I

From the introductory slideshow narrated by Patrick Stewart and the manual.

Not much is known of the beginning of the Lands, for the chronicles do not extend much beyond the Golden Age of the Ancients. The time before that we can only deduce from myths and legends.

But the Ancients succumbed during the War of the Heretics, a war of terrible power and destructive will. Believed to have been initiated as a conflict between the most powerful Ancients, it soon spread to all and the entire race of super-normal beings was annihilated.

After the fall of the golden age the world was plunged into darkness. Uneducated and illiterate, the surviving populous in the Lands soon reverted to their primitive states and lived isolated and obscure lives. The teachings of the Ancients were soon forgotten and the Ancients themselves soon passed into myths and legends.

But as time wore on the species began expanding and exploring the world left to them. This was the time of the Great Travelers, who wrote of strange lands and even stranger adventures, but the meeting of the new species was not always a peaceful one.

History echoes with the battle cries and death screams from the Racial Wars. Violent uprisings spread across the Lands as the inevitable conflict among cultures occurred. Lasting for nearly a millennium, the wars destroyed many cultures. Ultimately acceptance of other cultures ended the wars but not before much knowledge was lost.

This era was the basis of the White Alliance which formed of the four ascendant races: Humans, Dracoids, Huline and Thomgog. This alliance established dominion over the Lands and a new era of peace was ushered in.

But magic had been loosed in the Lands during the wars, magic unhealthy and nefarious. It found a home with the Dark One, leader of the Dark Army. For the last three generations, the Dark Army had addressed its attention to the throne of Gladstone, a center for education and magic in the Lands. The throne has been staunchly defended by the heroes of the Lands and remains to date undefeated.

Yet evil forces throughout the Lands are gathering again and the discovery of an ancient power may bring ruin to the Gladstone heirs and the White Alliance.

The Draracle has seen this and his sight is never disputed. 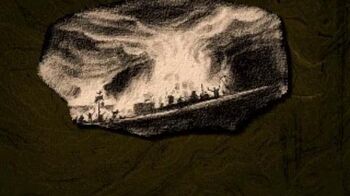 For generations, before the Urbish Mining Co. had been set up, the Urbish caves had been a trap for heroes, especially the dungeon-pillaging breed. The Urbish caves had always yielded riches. If you went down in the caves, you could always find wonderful treasure. But you always found horrible danger, too. The place was cursed! Folks call it the Mouth of Ruin. Of the few people who ever made it back to the surface, most came back insane or horribly diseased, or even undead.

However, perhaps four or five generations ago, the incredible Vaelan of the Sidari descended the mouth of ruin . Several years after he had been given up for dead, he came back up again. Alive, sane, and very, very rich. He never spoke of his encounters or experiences in Urbish Mines, but he claimed that he could always return to the caverns safely. He proved it, going down often and returning loaded. He claimed he knew a secret way to tame the demons but this secret... well, he kept secret.

But Vaelan kept coming back up again, and will such riches!

Whatever power Vaelan held over the demons of the caves, he didn't hold it over the men of the Lands. Humble Vaelan, who survived seven years in the caves, didn't last one year back among his own people. He was murdered for possession of this secret.

The Laird of House Urbish, on whose fief the caves were located, claimed not to be responsible for Vaelan's murder. Of course not. When the Laird wound up with the secret to the caves however - well, what could one say? The Laird claimed a legal right to the Vaelan's secret (which became known as Vaelan's Key. though no one has ever confirmed whether this was an actual physical key) as the caves were legally the Laird's property, as Vaelan had no heirs.

The Laird himself, armed with Vaelan's Key, descended, disappeared for a fortnight, and came back -- pale, scared, and half out of his wits. After recovering, he revealed no treasures -- he's a Laird, so who can say what he really had? Apparently, he found something, because he set up the Urbish Mining Company, and began stripping the upper levels of the Urbish Mines with the obsession of a mad-man.

Under the Urbish Mining Company, the Mouth of Ruin never turned up anything as wonderful as Vaelan's treasures, but it did yield rich ores beyond the capacity of any other mine in the history of the Lands. Surprisingly, the Laird had no trouble finding willing workers despite the horrific past of the Urbish caves. Greedy people flocked to Urbish from throughout the Lands, always certain that they would be able to sneak out a few nuggets, or gems, or whatever else the mines yielded without the overseers ever catching sight.

(This great migration of people from across the Lands explains how Gladstone and surrounding lands came to have such a diverse population.)

The Laird was rich, and his foremen were rich, and even the immigrants who traveled leagues to slave in the Urbish Mines were rich from the gems they smuggled from the Mouth of Ruin. But they, were also undeniably cursed.

Whatever Vaelan's secret was, apparently the Laird of House Urbish didn't quite get it. People said that the Laird's heart wasn't as pure as Vaelan's, and so couldn't withstand the evils of Urbish. The people were peasants, so what did they know? After the mining began, however, the House Urbish suffered disaster after disaster after horrible disaster. The House fell not even three generations after the Mining began.

The miners themselves? Many disappeared, an it was said that they strayed from the protection of Vaelan's Key (whatever it was) to find more riches deeper in the mine. Other miners, it was said, turned into monsters, horrid creatures who haunt the woods surrounding Urbish yet today.

Eventually, the mines were abandoned. House Urbish was no more.

Not that anyone -- with the possible, recent exception of Scotia -- has ever penetrated this fallen city. Indeed, fact of its existence properly belongs to the realm of rumor.

While there has always been strange activity around the Urbish caves, these hauntings have escalated dramatically since Scotia removed the Nether Mask from Urbish. Whatever magical barrier protected the fallen ancient city has been shattered. Once Scotia broke it to take the Nether Mask, anyone could get in -- and anything could get out.

The Draracle has served the peoples pf the Lands for many generations as an oracle and seer, giving (often at a very high price) precious advice without which the petitioner could survive or prosper.

This creature lives under Mount Margor, bordering the kingdom of Gladstone. The caverns underneath Margor are hazardous, dark, dank, twisty and probably full of poisonous gas. It is guarded by several monster sentries and many obviously manufactured traps that often prove lethal to the would-be spelunker.

The term "Draracle" is a vulgarity, signifying what ultimately the so-called Ascendant races valued of this ancient, reverent creature: a dragon oracle. it is little wonder, then, the contempt this "Draracle" shows for supplicants and petitioners!

Local lore says he only grants his prophecies to those who bring him great treasures, though he obviously has no need for such lavish wealth. The Draracle's great wisdom and knowledge, as far as is known, has never failed a petitioner.

Community content is available under CC-BY-SA unless otherwise noted.