Similar to its contemporary Realms of the Haunting, Guardians of Destiny is a first-person adventure game which, while featuring occasional combat, revolves around the solving of puzzles. Like in most adventure games, the player can interact with objects and people by clicking on them, collect items into an inventory, and use items from their inventory on environmental objects. However, some puzzles also require the player to cast spells, use their melee attack, or drag objects and even enemy corpses into specific locations.

Navigating through the environment also often involves platforming challenges, some of which can be undertaken only in one specific form. The player character, Luther, has a curse which causes him to randomly change between three forms: human, lizard, and beast. Later in the game the player acquires spells which can be used to change form at will if in human or lizard form; once in beast form Luther must wait to change randomly back to human form, since the beast cannot cast spells. The lizard form is small, allowing it to enter tunnels inaccessible to other forms, but preventing it from crossing even shallow streams of water without drowning. It can run faster and cast spells more easily than other forms. The beast form is tall and heavy, such that it can make only mild jumps, but in some places its size allows it to step across gaps that the other two forms would have to jump over. The human form is an average of the other two in most respects, but is the only form which can equip weapons or armor.

Combat works similarly to The Throne of Chaos, except that the player's party consists of just one character, and most enemies will not attack the player character unless provoked. Luther can use a melee attack, fire a bow at range, use items, and cast spells at four different levels. However, each spell has a fifth level which is only usable if Luther consumes an ancient stone or has acquired the Mantle of the Ancients, which occurs at a set point near the end of the game. Spells draw on a limited pool of magic points, which, like Luther's health, is gradually recovered over time.

The plot follows Luther, son of Scotia, who is imprisoned by the soldiers of Gladstone and accused for being a member of the Dark Army. Luther is cursed to be morphed into either a great beast or a lizard, thanks to which he manages to escape. While the Draracle guides him, Dawn and Baccata (from the previous game) initially chase, and later aid him. Luther must go on his quest while avoiding his many pursuers.

The player controls Luther on his quest to solve the curse. Randomly he will change forms, gaining the respective advantages (strength, or increased magical ability, and the opportunity to enter small spaces and discover secret areas). The power to change forms willingly is eventually bestowed upon the player in the game. 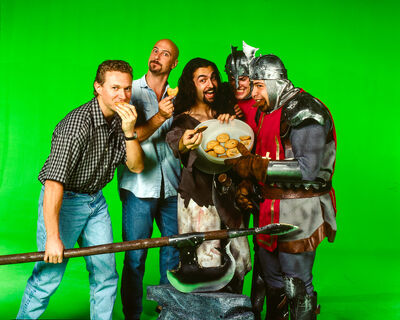 Advertisement
Add a photo to this gallery

Alternative cover (Asian countries)
Add a photo to this gallery

Luther gets on the Draracle's nerves by overstaying his welcome.

Speaking Stones are used to record events in history. This one has captured a battle between the Dracoid and Huline.

The Draracle sitting in his lair.

Luther overhears a conversation between the Draracle, Dawn and Bacatta.

Luther transformed into the Beast attacks the Gladstone guards sent to capture him.

The Ruloi Citadel is not a friendly place as the corpses that line the path to it confess.

Belial is posed to cast a fireball spell.
Add a photo to this gallery

Images published on the on the cover CD of the Czech gaming magazine SCORE (issue No. 20, August 1995).

Logo
Add a photo to this gallery

Preview images published on the cover CD of the Czech gaming magazine SCORE (issue No. 41, May 1997). The date stamps on the files are from 8 April 1996.

City of the Ancients balcony

City of the Ancients

City of the Ancients

Skeleton
Add a photo to this gallery

Behind the Scenes[edit | edit source]

Retrieved from "https://lands-of-lore.fandom.com/wiki/Lands_of_Lore:_Guardians_of_Destiny?oldid=17686"
Community content is available under CC-BY-SA unless otherwise noted.