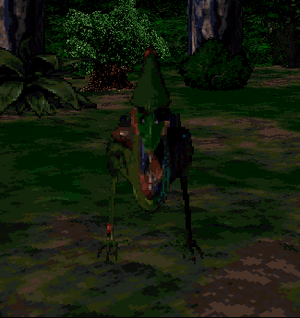 Lamplights are bipedal insectiod bird-like creatures native to the Southern Continent. Small and fast moving, they have a poisonous ranged attack and drop Venom Sacs upon death. Lamplight Eggs can be found scattered about the jungle floor and in caves.

For the most part, the Lamplights found wandering the forest floor of the Savage Jungle can be safely ignored as they are not initially aggressive to Luther. Once provoked however, they should be dealt with quickly, as in large groups they can quickly drain Luther's health with their poisonous attack. Both the large and smaller variants have the same number of hitpoints and make a habit of following Luther when in close proximity. The Lamplights inside the Lamplight Lair near their Queen are openly hostile.

During Luther's quest inside the Huline Temple, two puzzles (a shifting floor and an elevator) require using the wandering Lamplights, dead or alive, to complete them.

Retrieved from "https://lands-of-lore.fandom.com/wiki/Lamplights_(Lands_of_Lore:_Guardians_of_Destiny)?oldid=10672"
Community content is available under CC-BY-SA unless otherwise noted.