"Greetings warrior! What blade or belt can Kit'yara fit for you?"

Kit'yara is a Huline blacksmith in Lands of Lore: Guardians of Destiny. She can be found in her hut, deep in the Huline Jungle. Her son Daniel has been away for three years, having left to join the Wild Ones in the Savage Jungle. She possess the Great Sword Firestorm, which she will give to Luther in exchange for a Power Orb. Alternatively, Luther may proposition a "businessman" in the Huline Village to steal it from her.

Just before Luther leaves for the Savage Jungle, Kit'yara will offer him the War Blade as a gift to Daniel. 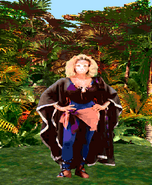 Retrieved from "https://lands-of-lore.fandom.com/wiki/Kit%27yara?oldid=11401"
Community content is available under CC-BY-SA unless otherwise noted.