Huline are a race of sentient hominid felines native to the Southern Continent. Quick-witted and agile, they make excellent rouges and have a long tradition of hospitality towards the other races. Kieran, the Champion of Gladstone who rescued King Richard and defeated the Dark Army sorceress Scotia, was a Huline.

Like Humans, there are some variations on the main race, with members of the dominant strain look like bipedal domestic cats, standing a bit shorter than the average human. Their coloring and fur patters very wildly and utilize a complex and ancient body language consisting of curling tails, twitching whiskers and swiveling ears. While not as strong as humans, they are much more agile. The Huline who live deep within the Savage Jungle, known as Tuani or "Wild Ones", appear much more animalistic in nature compared to their more "civilized" cousins occupying the Huline Jungle. Due to their digigrade feet, they are unable to don normal footwear and lack opposable thumbs, which makes holding items such as magic wands somewhat troublesome.[1]

Little is known of the Huline's history prior to the modern era, as the Huline did not keep a written record as the Dracoid did, preferring to pass down their narratives via oral tradition, a practice that has since gone largely out of favor except amongst the shamans of the tribal Wild Ones. What is known is that during the Golden Age the Huline, like most other races of the Lands, were endowed with peace and prosperity from the gods whom they called Ancients, and built great and wondrous Temples dedicated to their awesome power and generosity. However, this time of accord was not to last, for the Dracoids with whom the Huline shared their lands with grew envious and in secret conspired with an ancient of malevolent intent named Belial, who gifted the Dracoid with powerful weapons of Ancient Magic which they used to ruinous effect. Entire villages were wiped out almost instantaneous, driving the cat-folk further and further into desperation. They engaged in guerilla warfare and at one point came close to assassinating Belial himself in an ambush though ultimately unsuccessful. Eventually, the council of Ancients stepped in, Belial was sentenced to death for his crimes and Ak'Salar, last Emperor of the Dracoid, out of shame and guilt decreed on his deathbed to destroy the capital of Tsar'Ille and erase from history any and all involvement with the sinister being.[2][3]

Over the many years Huline culture eventually recovered from the Dark Times, with many preferring to eke out a more comfortable living within small communities in the more well-developed and civilized areas of the continent. Some however refused, and preferred to live as their ancestors did by hunting and gathering in the Savage Jungle. The river Bane that runs through the continent, consequently, serves as something of a partition between these radically different ways of life.[4]

Kieran, the canonical Champion of Gladstone - (Lands of Lore: The Throne of Chaos) 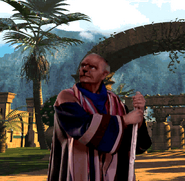 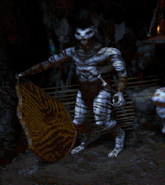 Daniel, a Tuani warrior - (Lands of Lore: Guardians of Destiny)

Mauri, a shady Huline "businessman" (Lands of Lore III)
Add a photo to this gallery

Retrieved from "https://lands-of-lore.fandom.com/wiki/Huline?oldid=17701"
Community content is available under CC-BY-SA unless otherwise noted.