Hive Warriors are large blue spider-like creatures encountered throughout Lands of Lore: Guardians of Destiny. Born from the Mother Beast, they serve as a prelude to Belial's eventual resurrection as they spread throughout the Lands wreaking havoc in their wake. They are responsible for the death of Shalla's child and soon invade the entire Huline Jungle. Initially a boss-level fight in the Hive Caves, they soon become a regular enemy in the Huline Temple and City of the Ancients. They are cousins of the much larger and deadlier Hive Guardians.

A Hive Warrior about to attack Shalla's child 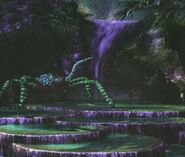 Retrieved from "https://lands-of-lore.fandom.com/wiki/Hive_Warriors?oldid=11137"
Community content is available under CC-BY-SA unless otherwise noted.