Commander of the White Army. Brother of Richard LeGré, Father of Copper, David, and Mark. Husband of Carmen.

Enough! We are not here to argue. The pig hunt is indeed a LeGré family tradition. I will teach you three brothers as your grandfather taught Richard and I – the wild boar is a most noble opponent…

Eric LeGré, also known as Eric the White,[1] is the brother of King Richard, father of Copper LeGré, and commander of the White Army. Eric died, along with two of his eldest sons Mark and David, at the beginning of Lands of Lore III.

At some point sixteen years prior to the Portal Crisis during the Dark Army Wars , Eric had an illicit affair with a Draconian barmaid Vernilla, resulting in his youngest offspring, the half-breed Copper. As news came that the witch Scotia had uncovered the powerful Ancient artifact the Nether Mask, Richard made preparations to strike against her with whatever troops could be gathered locally, as Eric and the White Army were a three days march from Gladstone Keep.

Although Eric made no secret of his son, he kept him at arms length to avoid potential scandal. He did make an effort to reconnect with him during the boar hunt, a LeGré family tradition. However this was cut short by an ambush of rift hounds, resulting in his death - and consequently - making Copper the lone heir to the throne of Gladstone.

As Copper later traveled to the Underworld , he heard the ghosts of the manor tell him that his father was here. In the basement below, he found him and explained to Copper how the broken shard of the Shining Path caused a great battle with the spirits of this world, with the victors using the shard to become dark and powerful while the pure spirts were imprisoned. Before leaving to join Copper's mother, Eric apologizes for ever denying his son and that death brought him the wisdom he did not have in life before disappearing. 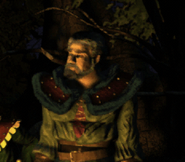 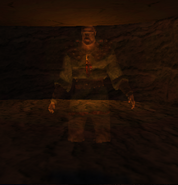 Promo
Add a photo to this gallery

Retrieved from "https://lands-of-lore.fandom.com/wiki/Eric_LeGr%C3%A9?oldid=14230"
Community content is available under CC-BY-SA unless otherwise noted.