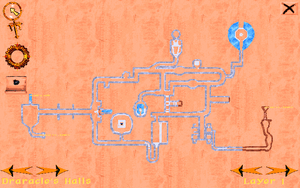 The Draracle's Halls or Draracle's Museum is a location in Lands of Lore: Guardians of Destiny. After The Draracle sends Luther on the Shining Path to the Huline Jungle on the Southern Continent, Luther may instead pull back the curtain to reveal an as yet unfinished museum curated by the Draracle dedicated to mortal history and explore this area instead. The exhibit showcases a wide variety of ancient artifacts and weaponry that Luther may utilize in his quest, as well as providing valuable backstory to his own past and destiny.

As soon as Luther enters the Museum, the portal behind him will close. He must make his way through the exhibits, avoiding or attacking the Skeletal Guardians on his way, and ultimately find another means to his destination.

The Shining Path to the Huline Jungle

Tapestry depicting the Draracle, entrance to the Museum

Axe of the Long Arm

Dragon's Chamber
Add a photo to this gallery

Retrieved from "https://lands-of-lore.fandom.com/wiki/Draracle%27s_Halls?oldid=17724"
Community content is available under CC-BY-SA unless otherwise noted.