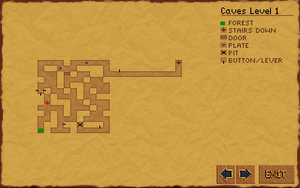 The Draracle's Caves are a location in Lands of Lore: The Throne of Chaos on the border of Gladstone in Mount Margor. Initially magically sealed, the Champion and Baccata must brave it's depths to seek council from The Draracle, an ancient and mysterious being with the gift of foresight who may be King Richard's only hope to discovering a cure to his nefarious malady at the hands of the wicked Scotia. In addition to it's population of hostile beasts, the tunnels are home to various deadly traps that must be circumvented, as well as great treasures for any would-be spelunker.

Retrieved from "https://lands-of-lore.fandom.com/wiki/Draracle%27s_Cave_(Lands_of_Lore:_The_Throne_of_Chaos)?oldid=14016"
Community content is available under CC-BY-SA unless otherwise noted.