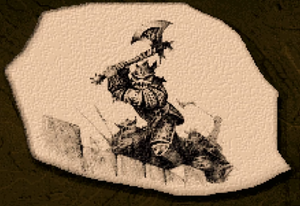 The Dark Army Wars were a series of conflicts that took place after the Racial Wars which saw the rise of the Dark One and his army against the Kingdom of Gladstone and the White Alliance, lasting for three generations and directly preceded the events of the Nether Mask Conflict.

After nearly a millennia of infighting amongst the various cultures, an alliance was struck by the four surviving Ascendant races, establishing dominion over the Lands and ushering a new era of peace. However, unhealthy and nefarious magic had been loosed and found it's home with the Dark One. He addressed his attention to the throne of Gladstone, a center for education and magic in the Lands. The Army of the Dark Path marched forth from the Mouth of Ruin and took the ancient Castle Cimmeria as its base, ravaging the Lands and it's people. They welcomed all who wished to participate in establishing the Regency, made up of the more crude, primitive and less loved beings. It's ranks filled with those of the "Dark races", primarily Orcs and Cabal Warriors.[1][2]

During the early stages of the Dark Army Wars, the husband of Margarithe Fiston was slain by a raiding party as he accompanied the wagons to market along Gladstone's main road. She became enraged, blaming the lax security of Gladstone for the loss of her husband, as well as nursing a long-held hatred for King Richard after he spurned her romantically earlier in life. Turning enthusiastically to the dark side, she took on the name Scotia, burying herself in studies of the dark and magical arts, eventually becoming the arch-sorceress of the Dark Army.[3][4]

One of the greatest warriors of Gladstone was Thohan the Brave, a mercenary leader who forged the legendary sword that bears his name and wielded it into battle. It is said that on the day he died, the blade was not with him. [5][6]

It was during the first siege of Cimmeria that Eric the White, commander of the White Army and King Richard's brother, came upon and performed a kindness to a young half-breed Dracoid dancing-girl name Vernilla, whom he had met in the tavern he frequented. Amid the darkness of war, their relationship blossomed and she bore him a son - Copper. When the armies retreated, Eric returned to Gladstone and left Copper to be raised by his mother.[7][8]

In the final battle of the War, the Dark One was slain by the White Circle near the city of Yvel, destroying both in the process. The leadership of the Dark Army then fell upon Scotia, who bid her time until she uncovered the Ancient artifact the Nether Mask, and where the story of The Throne of Chaos begins.[9]

Retrieved from "https://lands-of-lore.fandom.com/wiki/Dark_Army_Wars?oldid=17600"
Community content is available under CC-BY-SA unless otherwise noted.