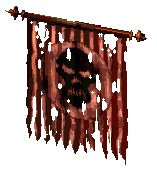 The Dark Army or Army of the Dark Path[1] is a faction in the Lands of Lore series.

The seeds of the Dark Army were planted long ago during the War of the Heretics as an early incarnation, or possibly even during the Golden Age. The early Dark Army was responsible for a number of atrocities during the Dark Times, although there is little record of these events.[2]

Initially lead by the mysterious Dark One, the witch Scotia takes control of them in Lands of Lore: The Throne of Chaos, commanding the attack on Gladstone Keep, leading to its surrender and the capture of King Richard. The Champion and his companions follow after her and her forces back to Castle Cimmeria, eventually confronting her and using the Whole Truth to destroy the Nether Mask, killing the witch in the process.

During Lands of Lore: Guardians of Destiny, the Dark Army is leaderless and fractured, though small camps pocket the subterranean regions beneath Gladstone, pledging their loyalty to Luther, who by right of succession is the new leader with the death of his mother. Should he pursue the path of evil, this will become his new destiny.[3][4]

By the the events of Lands of Lore III, it is uncertain what leadership, if any, exists - but it is clear the Dark Army is a mere shadow of what it once was, many of its Orc soldiers having since abandoned their nefarious ways and now attempt to integrate into civilized society.[5][6]

Retrieved from "https://lands-of-lore.fandom.com/wiki/Dark_Army?oldid=16810"
Community content is available under CC-BY-SA unless otherwise noted.