Daniel is a Huline, Tuani Warrior and son of Kit'yara.

Before Luther leaves the Huline Jungle to journey to the Savage Jungle, Kit'yara will approach him and ask to deliver his grandfather's War Blade to him. Alternatively, the blade may be taken from her body should Luther decide to kill her. Fulfilling this request will allow Luther to peacefully enter the Wild Ones Settlement. Although gratful for the blade, he is quite short and will become increasingly agitated should Luther continue to try to speak to him without completing the Shaman's quest.

When Luther has succeeded in this endeavor and brought back a Silverleaf, Daniel will induct Luther into the tribe through ritualistic combat. If Kit'yara is alive, this fight will be mostly ceremonial in nature, and neither Luther nor Daniel have to win nor kill one another to proceed. If his mother is dead however, this will be a dual to the death and much more difficult.

If Luther attacks Daniel or any other tribal member unprovoked at any time, he will be transported to the gladiator pit in the center of the village and forced to face off against them all at once. In combat he utilizes a greater shield spell and poison ranged attack. 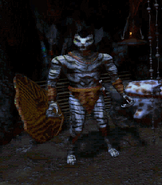 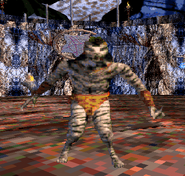 Daniel's unused live-action incarnation
Add a photo to this gallery

Retrieved from "https://lands-of-lore.fandom.com/wiki/Daniel?oldid=16725"
Community content is available under CC-BY-SA unless otherwise noted.