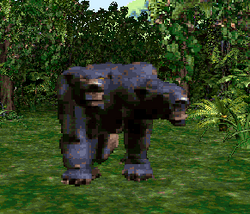 Cerberus Tigers[1] are wild creatures encountered in the Huline Jungle in Lands of Lore: Guardians of Destiny. In melee combat, they attack with claw and fang, but will release a series of poisonous barbs at range. They are likely related to the similarly two-headed Sabre-Toothed Cerberus Tigers.

Official screenshot from SCORE Magazine CD, May 1997
Add a photo to this gallery

Retrieved from "https://lands-of-lore.fandom.com/wiki/Cerberus_Tigers?oldid=11043"
Community content is available under CC-BY-SA unless otherwise noted.