Celerian is a member of and quest giver for the Iron Ring.

Celerian: You must be Copper. I missed ya this mornin.
Celerian: Anyway, you come here to join the Iron Ring? I guess our guild makes them other sissy Guilds look pretty say huh?
Copper: And what do I have to do to join? Didn't you just want a coin from me as a pledge?
Celerian: You got it. Gimme a pledge, and yer practically in.

Celerian: Huh! So yer the big man now huh?
Copper: Say what?
Celerian: I heerd yer goin in and out of them different portal worlds like they was swiss cheese.
Copper: Well, I did visit one other world. And it was full of the kind of women you'd like Celerian.
Celerian: I been there, in the old days. Morrison says you found a new way to get there though. we used to have to use the tower near Yvel, and of course, we'd always lose a coupla guys in the dimensional flux. Been years since I been there.
Celerian: Well anyways, Chesara sez yer supposed to get yer next assignment now.
Copper: Finally.
Celerian: Chesara wants you to find out who's in charge in one of those worlds, and then use yer Gladstone fightin skills to make em heel.
Copper: Chesara wants me to conquer one of the Portal Worlds?
Celerian: That's what she said.
Copper: I don't suppose I get credit for the two I've already conquered?
Celerian: I don't think so Squirt. You already conquered two ya say? What are these worlds, Lands of the Dwarfs?
Copper: As always, you're support and confidence in me is overwhelming Celerian.
Celerian: Jes doin what I can, Squirt. 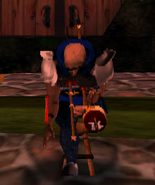 During the Crisis in Gladstone, alive but severely wounded

Concept art by Ren Olsen
Add a photo to this gallery

Retrieved from "https://lands-of-lore.fandom.com/wiki/Celerian?oldid=17638"
Community content is available under CC-BY-SA unless otherwise noted.