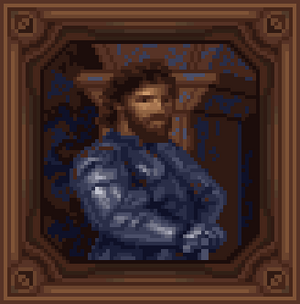 Blaise LeGré (or Ludwig ver Grundle) was 73rd heir to the throne of Gladstone and great-grandfather of Richard LeGrey. Founder of the LeGre Dynasty, he was previously the Royal Gamekeeper and took control of Gladstone away from the three insane Chevres brothers who were co-ruling the country at that time. Blaise unified the country under his own rule and that of his line, which has ruled Gladstone to this day. According to legend, it was Ludwig who first came into possession of the Ruby of Truth after it was either sold or gifted to him by Sir Michel Robard. Blaise added the stone to Gladstone’s growing fortune and left it un-touched for decades.[1][2]

Retrieved from "https://lands-of-lore.fandom.com/wiki/Blaise_LeGr%C3%A9?oldid=9175"
Community content is available under CC-BY-SA unless otherwise noted.