"Is every moment a grand poetry for you? "Taste my sword"? Sorry, I have no speech for you, but what do you care? You'll soon be dead."

Belial is a dead Ancient god of destruction and domination, resurrected after his execution eons ago, "Hero" of the Dracoid race and the primary antagonist of Lands of Lore: Guardians of Destiny.

During the War of the Heretics, Belial gave weapons and powerful magics to the Dracoid who used them in their conflict against the Huline, bringing untold destruction and devastation to the Southern Continent. The council of Ancients decreed that this act could not go unpunished and it was Anu who was tasked with carrying out the killing blow. However, he had already arranged his resurrection by means of a massive Mother Beast who would serve as his new mother, in the meantime populating the Lands with her lesser children as a prelude to her final maternity. He awaited his final return in the great sunken City of the Ancients until the time was right. The only means of defeating him is with an ancient magic powerful enough to force his rebirth early and kill him in his infancy before he could become too powerful - that source of ancient magic would turn out to be Luther's curse.

All weapons, except for Horn of Belial, Darkstorm and the reforged Thohan's Great Sword

Belial is easily the most powerful enemy Luther has ever faced, utilizing a wide variety of both destructive and protective spells, including aggressively summoning Imp Lords to defend him. He is immune to all mortal weapons, only susceptible to Ancient Magic and his own horn. The faster Luther can overcome his various traps and minions to reach him in his final chamber, the weaker he will be - the three rooms he runs to increase his health, his magic, and hold his set of Dragonscale armor in that order, which Luther can handily make use of. 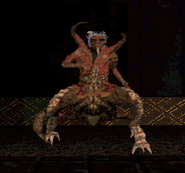 From Speaking Stone, shortly before his execution 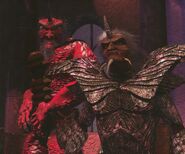 Retrieved from "https://lands-of-lore.fandom.com/wiki/Belial?oldid=17327"
Community content is available under CC-BY-SA unless otherwise noted.