"Hello, we have not met. I am Baccata, Dawn's apprentice."

Baccata is a Thomgog, companion of Dawn, Talamari, officer of Gladstone and an important supporting character throughout the Lands of Lore trilogy. He serves as deuteragonist to the Champion in Lands of Lore: The Throne of Chaos and tritagonist to Luther in Lands of Lore: Guardians of Destiny. He has two siblings; Petricia and Viscosa.

Prior to the Nether Mask Conflict, Baccata was studying to become a member of the Talamari under mystic Dawn, royal councilor to King Richard of Gladstone. Though Thomgog are traditionally warriors rather then mages, he cast aside the aggressive nature of his kin and took to his apprenticeship well, becoming an adequate mage - something most Thomgogs never do. His studies were interrupted by the sudden infiltration and poisoning of Richard by the nefarious witch Scotia, whom Dawn managed to fight back and latter cast a magic shroud around his unconscious body until a cure could be acquired. It light of recent events, Timothy, who had been The Champion's companion up to this point, needed to be let go as his services were need at the Keep, being replaced by Baccata in his stead. Baccata had already visited the Draracle by this point and knew the way and mystic chant to open the entrance to his caves. The Champion and Baccata would then make their way through the hostile caves before uncovering a nest of Scavenger pods where they found Lora, a farm girl from Grisbl who came to the caves to serve the Draracle on behalf of her village. She accompanied them to the very end where they met the Draracle and he gave them the riddle to the Elixir of Tybal. When they returned to the Keep however, they discovered is had be destroyed by the Dark Army and Richard had been captured. They fled by boat across Lake Dread to Opinwood and along the way met with the Gorkha's and obtained the Ruby of Truth in their chieftain Mathpasha's possession. The Champion and Baccata thereafter reunited with Dawn, who warned Baccata that violence interfered with his training and discouraged him from continuing his journey and staying with her, to which he rebuffed her, saying he would not abandon his friends nor his king, even if it meant his training suffered for it to which she relinquishes him. From this point onward, Baccata served The Champion as his faithful companion to the very end when he ultimately accompanied The Champion and Paulson to Castle Cimmeria where he aided in defeating Scotia.[1]

Upon returning to Gladstone, he was honored as an officer of Gladstone and completed his training with the Talamari under Dawn.

After King Richard's poisoning:
Baccata: Hello, we have not met. I am Baccata, Dawn's apprentice.
Baccata: I am familiar with the path to the Draracle and I would be honored to join you in your quest.

In the Northland Forest:
Baccata: Do you recall seeing the caverns east of the Keep?
The Champion: Uh, er, no, we...
Baccata: There is a passage. Let us bear east and then proceed north as soon as possible.

In front of the Draracle's Caves entrance:
Baccata: Here, this mystic chant will open the passage. Connaax vur Talamari! 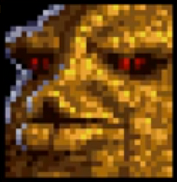 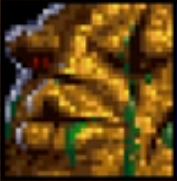 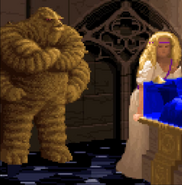 Baccata's introduction at the Royal Council after Richard's poisoning

Character Screen
Add a photo to this gallery

At the Cantina in the Huline Village 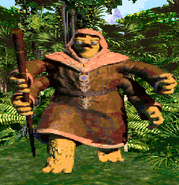 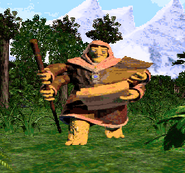 The Huline Jungle with maps 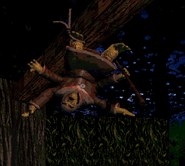 The Savage Jungle, caught in a Tuani snare 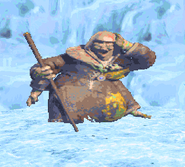 The Claw Mountains, wounded by Ru-Loi

Fighting Belial's Statue in the City of the Ancients

Striking the Statue down with the Serpent Staff

Final moments
Add a photo to this gallery

So Thomgog immortality doesn’t make them impervious to damage and/or normal death by destruction, poison, etc. sadly there are methods of death that can interrupt the Thomgog birth cycle. Tragic. Also any protections afforded by a mundane racial characteristic would be completely invalidated by Ancient Magic, Belial’s horn, the claws of the Draracle, etc. I always wanted there to be weapons/devices that were forged of Ancient parts (quenched in Ancient blood, made from Ancient Bone, etc.) that would be top-tier artifacts. As a general rule, all things Ancient trump all things Mundane. However, is it possible that Baccata could have been ‘reseeded’, perhaps by a close lady friend with blonde hair? And that a new version of Baccata would show up somewhere in the future? And team up with said blonde lady friend’s daughter? Perhaps with some vestigial memories of his former incarnation? Absolutely!

Retrieved from "https://lands-of-lore.fandom.com/wiki/Baccata?oldid=17710"
Community content is available under CC-BY-SA unless otherwise noted.