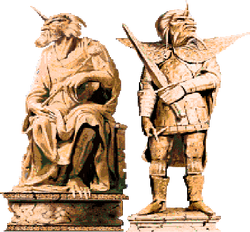 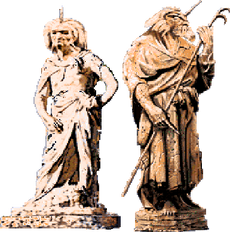 The Ancients were a race of super-normal beings that once prospered during the Golden Age of the Lands. Powerful, and seemingly invincible, they roamed the land, holding dominion over all. There was no want, and all the peoples of the land lived in peace and harmony until the War of the Heretics, which saw the destruction of civilization and the annihilation of their race. [1] The only Ancients to remain were Anu, better known as The Draracle, and the evil god-ruler Belial.

The Ancients were physically imposing, towering above all other races possessing large muscular frames, covered head to toe in thick reptilian-like scales with large eyes and a horn growing from the center of their forehead. They also appeared to have been adept wielders of powerful magic and, in the Draracle's case, clairvoyance, though whether this ability extended to the entire race in uncertain.

Anu, better known as "The Draracle" to mortals

The Ancient spirits that dwell in the Chamber of Voices 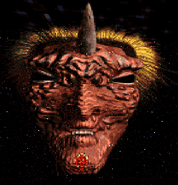 Retrieved from "https://lands-of-lore.fandom.com/wiki/Ancients?oldid=17721"
Community content is available under CC-BY-SA unless otherwise noted.