"Soon over? I could only hope. I may die soon, but my spirit will never rest until all trace of our immoral collaboration is erased."

In the aftermath of the disastrous War of the Heretics, he repented of his evil relationship with the dark God Belial upon his deathbed and commanded extreme measures to erase all traces of the Dracoid nation's guilt. The written records were burned, pictographs were obliterated, and many of the royal court were executed. Finally, the dracoid capital was undermined and made to sink to the bottom of the Bane River in ruins. Those who remained behind mutated into a race of multi-tailed lizard beasts known as the Ssar. Only the Speaking Stones exist now as a record of their true history.[1]

The Dracoid nation collapsed and its society completely disintegrated. They scattered and fled to the other continents, becoming hermits, menial laborers, and wanderers, ashamed and embarrassed of their heritage. Despite the mass exodus, the dracoid initially managed to retain their customs and traditions. Few retained any memories of their mighty ancestors, but there were others who kept their blue-blood lineage a secret, fearful of reprisals. Vernilla, a half-Dracoid/Human dancing-girl living in Cimmeria, the lover of Eric LeGré and Copper's mother, was of royal Dracoid heritage.[2][3]

When Luther encounters his spirit in the Dracoid Cemetary, he will task him with bringing his remains to the ruins below. Doing so will resurrect the statue of Belial which will destroy the Great Worm, in exchange for the Silverleaf required for the Wild Ones ceremony. 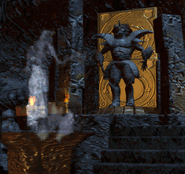 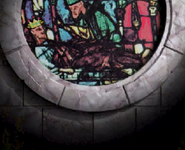 The Emperor's Remains
Add a photo to this gallery

Retrieved from "https://lands-of-lore.fandom.com/wiki/Ak%27Salar?oldid=17582"
Community content is available under CC-BY-SA unless otherwise noted.